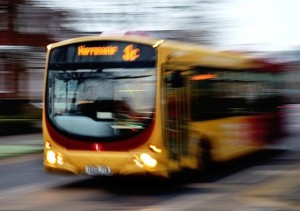 Apparently, many non-mechanics are spending way too much time under the bus. At least that is what I must assume after being in so many workplaces and hearing, “She threw me under the bus.” Being “thrown under a bus” is just a figurative way of saying that someone is putting another in a difficult situation to make themselves look better. This type of office politics is motivated by unhealthy competitiveness and egotism.

The act of throwing a colleague under the bus to gain recognition is a bad idea for at least three reasons. First, doing deliberate harm to another person reveals a deep character flaw. The astute manager will see that someone who is willing to damage the reputation of a co-worker in order to elevate their own status is not the kind of person who should be considered for a leadership role.

Second, it destroys the trust that others have in the thrower, which decreases the pleasure of working together. No one wants to have to constantly watch their back for fear of being the next throwing victim.

Third, it has a devastating impact on the workplace culture. Cooperation among employees suffers, product/service quality diminishes, the workplace becomes a battlefield with wounded warriors, valuable employees leave to find a more healthy work environment, recruitment becomes more difficult and, of course, the bottom line suffers.

When managers tacitly encourage this type of one-upmanship through their own inaction, silly squabbles turn into war. In the book, The Anatomy of Peace, the Arbinger Institute observes, “Most wars between individuals are of the ‘cold’ rather than the ‘hot’ variety—lingering resentment, for example, grudges long held, resources clutched rather than shared, help not offered. These are the acts of war that most threaten our homes and workplaces.”

The ‘hot’ war acts include verbal abuse, physical abuse and sabotage. They are usually dealt with promptly because they can’t be ignored and can create the basis for an employee lawsuit. The ‘cold’ war acts cited by Arbinger are more subtle but can be equally devastating to a company. Since they are subtle, they can only be eliminated by creating a corporate culture where peers police each other and leaders set the example.

When managers create an environment of inclusion that fosters friendships, the company becomes a desired employer where employees never want to leave. The Gallup organization, which does opinion polls, has developed an employee questionnaire called the Gallup Q12. This twelve question survey determines the level of employee engagement and has been administered to millions of employees. It is interesting to note that six of the twelve questions are about how the employee connects with others at work, including the question, “Do you have a best friend at work?” Personal connection is a significant determinate of employee engagement. It is almost impossible to develop personal connection in an environment of cliques, attention-grabbing and vindictiveness.

Conventional wisdom is that great teams happen when team members try to be “the very best” engineer, plumber, salesperson, etc. at the company. Most managers would agree that they want their employees to be “the best.” However, when a person is focusing on being “the very best,” they are focusing only on themselves, their personal achievements and being better than everyone else. This narcissism creates contention and competition, which diminishes cooperation.

The most productive team is one where each team member does his/her job in a way that helps others to do their jobs, in order for the team to achieve the company objectives. Leaders will improve morale and productivity by helping employees to work together as “the best team.” In other words, everyone is on the bus and no one has been thrown under it.