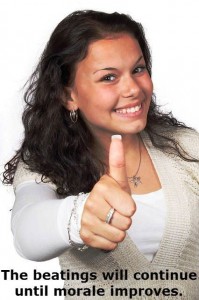 Just because you can fire someone with a smile on your face and without raising your voice, doesn’t mean that you know how to properly discipline your workforce.  “The Wizard of Westwood” said, “A coach is someone who can give correction without causing resentment.”  Those are words one of the best coaches of all time, John Wooden.  John Wooden won 10 NCAA national championships and is the former UCLA faculty member that I admire most, and I don’t even enjoy watching basketball.

Discipline is a requirement for success in every business.  The definitions of discipline include both “punishment” and “training that corrects, molds, or perfects the mental faculties or moral character.”  The latter of the two definitions is the one that seems to most accurately reflect what a good coach does in order to create a winning team.  A good coach in both business and athletics is focused on improving the team member in order to contribute to the success of the organization in a manner that inspires, rather than punishes, the team member.

Some would call Sir Alex Ferguson the greatest coach in history.  Before retiring in May 2013, Ferguson spent 26 seasons as the manager of Manchester United, the English soccer club that ranks among the most successful and valuable franchises in sports. During that time, the club won 13 English league titles and 25 other domestic and international trophies—giving him a success rate nearly double that of the next-most-successful English soccer club manager.

In 2012, Harvard Business School (HBS) Professor Anita Elberse examined Ferguson’s management approach and developed an HBS case study around it.  These are the key philosophies that Elberse documented.  (The quoted comments are those of Sir Alex Ferguson.)

There are times when “cutting players that are not contributing to the benefit of the organization” is necessary.  Terminating an employee is difficult for the one being terminated, and often for the employer.  Company policies and employment law must be followed, but it must be done humanely.

The most important concept to remember is that termination is not the final judgment of the employee as a person or a worker.  It must be viewed as time for the employee to find a different job where he or she is better suited.  Compassion on the part of the manager is always appropriate.  Avoid “horriblizing” the terminated employee by blaming them for all of the problems in their organization.  Finally, keep your focus on how to help them move on to a position where they can succeed.

Whenever dealing with issues of employee performance, it is of utmost importance to get your facts straight, discuss the problems rather than accuse and attack, be very clear in what you expect, and really listen to the employee.  A fundamental principle of employee discipline is expressed by Robert A. Eckert, the former CEO of Mattel, in these words, “Punish in private; praise in public.  Make the public praise timely and specific.”

A successful business must be a team effort.  Discipline – “training that corrects, molds, or perfects the mental faculties or moral character,” must be an integral part of making the team successful.  Be a good coach, not a bully nor a prima donna, if you want your organization to achieve its potential.